On the day, the second stage of the play offs to become Chelsea FC’s ePremier League representative took place in the venue’s Great Hall; at 1400sqm its largest and most versatile event space. With the support of Chelsea FC’s expert team, the Great Hall was transformed into the perfect gaming environment, complete with PlayStation 4 and Xbox console stations ready for the elimination rounds, spectator zones fitted with comfortable seating and a large 2x3m viewing screen showcasing all the action.

To complete the gaming experience, the Great Hall was filled with Chelsea FC and ePremier League branding, including backdrops, neon signs and pull-up banners. The event was streamed across digital channels, with highlights posted on YouTube and Chelsea TV.

Sports presenter Rachel Stringer and pro-gamer Wolfy Playz not only hosted the event, but also participated in Instagram Story interviews and made live announcements throughout the event. Commentating on all things FIFA and the tournament itself were gamers Mark ‘Onset’ Hatcher and Dan Gaskin, as well as former footballer and Chelsea TV presenter Jason Cundy.

On arrival all 32 shortlisted representatives were given a personalised Chelsea FC shirt, printed with their gamer name, before being directed to their individual gaming station. .

The catering team created a menu to suit all necessary dietary requirements. Dishes included macaroni cheese with a variety of toppings, including wild mushrooms with smoked garlic, thyme, red onion confit and stilton, hot smoked chicken with chipotle, smoked paprika, chorizo and Spanish blue cheese, and sides such as waffle fries and jars of crispy shallots and pork scratchings.

The events team showed extensive knowledge of the stadium and its capabilities. Without their help, we would not have been able to produce the event in the way that we did. We put our trust in their team and they delivered

Chelsea Football Club was delighted to host ‘Women in Sport’ last Monday as part of The XX Series during Leaders Week London (8–11 October 2018). 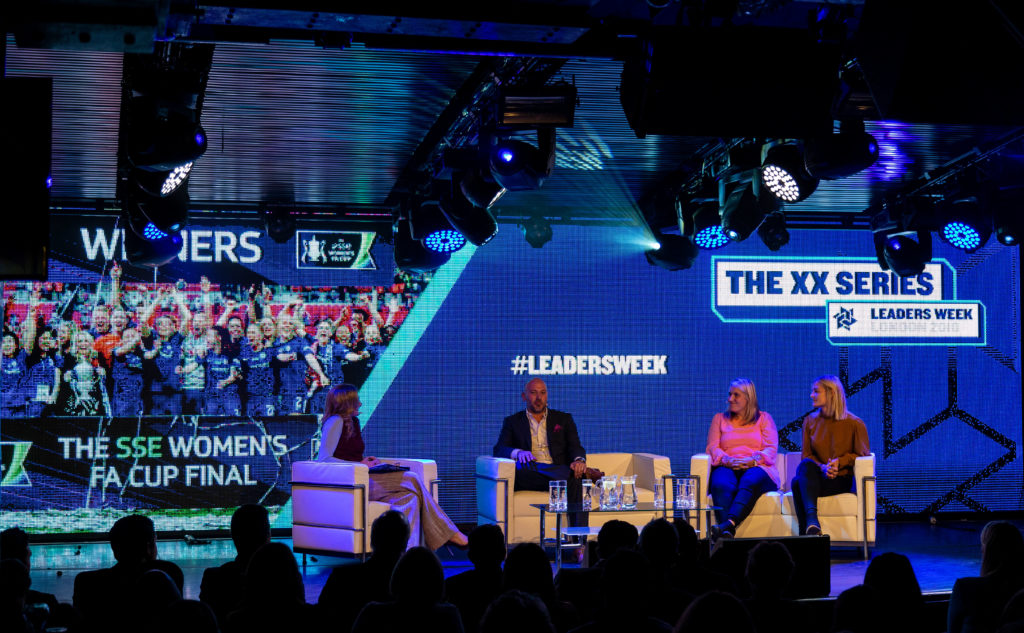 Hosted by Gabby Logan, Women in Sport provided a unique platform to celebrate the successes of female sport and explore the current opportunities and challenges in the promotion, marketing and commercial sponsorship of the women’s game.

The evening was attended by world leaders in the sports industry who are at the heart of driving the growth in women’s sport and amplifying the contribution of women working in in industry. Panel discussions from Chelsea Women’s manager Emma Hayes, club ambassador Katie Chapman and Chelsea Women’s chairman Adrian Jacob provided a platform for open debate around the expansion and future of women’s football, as well as the positive steps taken in the on-going development of the sport.

Head of venue and development at Chelsea FC, Simon Hunter said: ‘”We are delighted to be a host partner for such a fantastic event. It has been a successful year at the club for women’s sport, with Chelsea winning our second Women’s FA Cup in May, and kicking off our season with great form. Women in Sport is a great opportunity to explore the importance and growth of women’s sport.”

Women in Sport was the opening event in the Leaders Week programme, which brought leading members of the international sports industry together to Chelsea Football Club, one of London’s most iconic sporting venues. Chelsea FC was delighted to welcome Leaders Week London back to Stamford Bridge for the first time since its hospitality and events business was rebranded to ‘Club Chelsea’.

Contact us to see how we can support your next event with world-class facilities and first-class service, in London’s most complete venue.